The lower you are in search rankings, the more volatility there will be. When you’re at number one, you’ll fluctuate some. You might drop to position two or three, and be back up to one in a day or two. It can have a significant impact on traffic, but you’re largely stable in the top few results for your keywords.

When you’re down in the teens, you’re at the peak of the bell curve. You have a lot more competition within a few points of your position, so minor changes have a much larger impact. As Google adjusts elements of their algorithm and you adjust elements of your site – even just publishing new content – you shift around. It’s completely normal and there’s nothing you can really do about it beyond improving your site naturally.

Google is actually changing their algorithm virtually constantly. A lot of the major updates over the last few years, like Panda, are actually ways Google implements machine learning and adaptation in their algorithm.

They make manual tweaks and adjustments almost daily, the machine learning is constantly making small tuning changes, and larger updates are pushed every couple of weeks. Moz tracks updates, but even they are only showing major changes that affect large numbers of queries. The minor shifts and changes that happen every day don’t qualify. Again, this is natural, and there’s nothing you can really do about it.

Google may be changing their algorithm on a near-daily basis, but they also save up and make larger changes all at once when necessary. We usually give these updates names, like Panda, Penguin, Hummingbird, Mobilegeddon, and Fred. With every update comes fluctuations, which SEOs generally call the Google Dance. Every update is tested in a limited environment and, once it’s determined to be satisfactory, is pushed to the live index. Even then, it’s rolled out in waves, since the index is so huge. Major changes take days, sometimes even a week or more, to settle into a new paradigm. This change causes all kinds of fluctuations to the keyword rankings of various sites, some more than others.

A sudden change in your competition can have a serious impact on the keyword rankings of everyone around them. Think of it like someone doing a cannonball in a pool with a handful of other people floating. 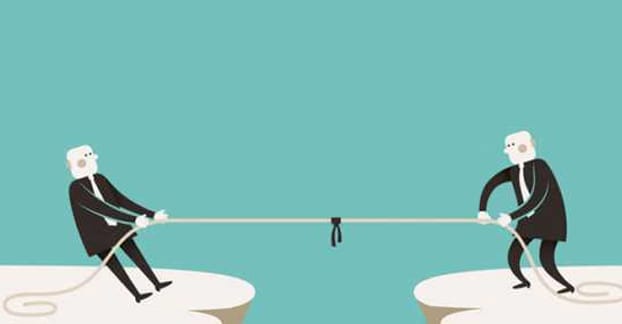 Their waves will send everyone floating to and fro until everything settles and the newcomer floats or sinks. A sudden new competitor can jostle everyone around, and the collapse of an existing competitor creates a void that has to be filled. With thousands of websites launched every day, there can be a lot of fluctuation as Google picks them up and figures out where to place them. As usual, this isn’t something you can change; just keep your own site improving and buffer yourself against newcomers.

A sudden surge in popularity for a given topic can make rankings shuffle around quite a bit. A low-volume keyword might seem somewhat stable, but a surge of traffic gives Google a bunch of new data they can use to figure out which sites users really prefer. This could be a brand hitting the news, a topic becoming important, or something as fickle as the internet just picking up and running with some site they think is funny.

Trends are unpredictable and can’t really be planned around. The best you can do is capitalize on them when they happen and hopefully settle at a better position when all is said and done. Ride the wave to victory, as they say.

Some businesses and keywords have highly seasonal traffic. Black Friday Sales, for example, are dormant for most of the year, but pick up dramatically in the weeks before the shopping holiday. That sudden surge in temporal traffic can be planned for, but it’s always a crapshoot what will happen. Every year, sites go down under heavy load they knew was coming, and even a temporary outage can shuffle around search results while others struggle to keep up.Temporal interest tends to come and go, and it can usually be predicted, but you never know where you’re going to end up. It’s another case of doing the best you can, riding the wave, and capitalizing on the traffic.

Every time you publish a piece of content, it triggers a complex network of machinery to spring into action. Google indexes that piece of content and figures out where it should be ranked and for what keywords.

This affects how the rest of your site is ranked as well. Good content can position itself well, as well as boost the rest of your site. Bad content can drag the whole site down. Every new piece of content changes the math that determines where your site is ranked. And, since Google search is all about the relationships between related sites, every piece of content published in your niche changes every other site in your niche. If someone else rises above you, you drop down, right? Always strive to publish the best quality content possible.

Every few years, and every time a major content-focused Google update goes live, it can be worthwhile to perform a content audit. Keeping up with your site, knowing what content is dragging you down and what is fine to leave alone, can be a great boon to SEO. So many sites have old, dead content dragging them down, but they don’t think something that old matters.

Removing old content can cause a lot of fluctuations. In some cases the loss of content can cause a loss of trust and make your site sink a little. In other cases, removing bad content causes your site to shoot up, like a hot air balloon when the ballast is cut. You’ll eventually stabilize, but any time you remove content, especially large amounts of it, your site has to be re-analyzed and repositioned.

Links are the crucial backbone of Google search. Every other element of SEO is built on top of a foundation of analyzing the network of links between sites and giving those links value.

Whenever you perform a link audit and change the links pointing at your site, your entire position has to be re-evaluated. Removing bad links can boost your search ranking, while accidentally removing good links can cause you to drop. It’s almost always worthwhile to perform a link audit, however, so don’t let the temporary fluctuations discourage you. You’re pretty much always going to end up in a better position than you started.

Changing your URL is a dramatic change to your website that will always cause massive fluctuations to your search ranking, while Google figures out what is going on. From Google’s perspective, you didn’t simply change your name. A new site popped up with all of your content, and your site disappeared. Google has to figure out what happened; is this new site an imposter? Did you redirect your URLs properly, and are the changes permanent? Does the new domain add value or does it detract from your site and your message? It can take weeks or even months to fully settle your ranking after such a major change. Strive to keep up with your white hat SEO while this happens to try to settle at a better position.

There are, of course, negative causes of ranking fluctuations. Search penalties, both automatic and manual, can apply. Some of them happen suddenly without warning, when Google decides to take action against your site. Some of them happen when Google pushes a major update and finds your site lacking. This is where it helps to keep an eye on your competition. If everyone is fluctuating, there’s nothing to worry about. If it’s just you, it’s time to figure out what happened.

Check Moz for any reports of Google updates, and check your webmaster console for any indication of a manual action. Identify what might be causing a Google search penalty, and strive to correct the problem. It might be changing standards, necessitating a site audit. It might be something you did causing a new penalty. You might just have been caught up as part of a PBN purge or something else. You simply need to figure out what happened and take the necessary corrective action.

This one is somewhat related to number 11; a negative SEO attack can bomb your search ranking, at least temporarily, before Google figures out what’s happening and starts to ignore most of the negative links. If you experience a sudden drop in your search ranking and don’t see anything in your search console, and there are no indications of a major search algorithm change, check your backlink profile. It’s entirely possible that someone set out on a campaign to bomb you with spam links.

In cases like this, you can usually disavow the links and get your former ranking back, but that’s not the issue. The fluctuations are inevitable, at least as long as Google is still determining whether or not you’re doing it yourself. Some people buy spam links for themselves willingly, of course, and that kind of action deserves to tank a site.

Another dramatic shift in search ranking comes when a site is compromised. If someone hacks into your site and leaves some visible sign behind, it can do anything from tank your ranking to removing you from the index entirely.

Obviously, if this happens, you have a lot more to deal with than just your search ranking. You need to remove signs of the hackers, you need to re-secure your site and buff up security to fix whatever hole allowed them in, and you need to figure out whether or not any sensitive user data was stolen. Only then, once you have fixed all of the related issues, can you begin to care about your search ranking again.

Starting, stopping, or changing your SEO techniques can have a big impact on your ranking, and that ranking will always shuffle and bounced up and down while it settles in a new position. It can be anything from targeting new keywords to new backlink or guest posting strategies, from a site redesign to a link audit. Anything you change or do that affects SEO will cause your ranking to fluctuate. This should be expected, and will settle down once Google figures out what’s going on and where you should reside.

Running paid advertising can affect your organic SEO in a number of ways. Too many ads on your site can hurt their ranking. Ads with bad congruence between ad and landing page can hurt you. Good ads can boost traffic, which can get you more links and clicks, which are good organic indicators. Social network ads can get you more links, more traffic, and more social proof, all of which are generally good. Starting or stopping ads, particularly high volume ads, can have a dramatic effect.

A Complete SEO Solution:- Need an SEO Freelancer? I am a Freelance SEO Service provider to help you gain top search engine rankings for your websites. complete SEO and SEM services.